Prices of nitrogen, phosphate, and potash fertilizers began increasing in 2002 and then increased sharply and reached historic highs in mid-2008. During the 12 month period between April 2007 and April 2008, nitrogen prices increased 32%, and the price of phosphate and potash nearly doubled. The USDA Index of Prices Paid by Farmers for Fertilizer, which reflects all types of fertilizer and has a base period of 1990-92, increased by 216 points between 2006 and 2008. 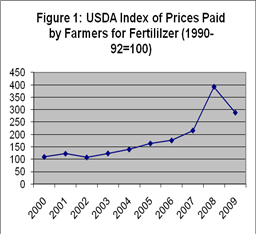 Shift to a Global Supply Chain

The source of imported fertilizer varies by product. Roughly half of U.S. ammonia fertilizer is imported through Trinidad and Tobago in the Caribbean which are close to a supply of natural gas. Approximately 70% of Urea is imported from Canada, Eastern Europe, China and Venezuela. Around 30% of UAN (urea ammonium nitrate) is imported from Canada, Russia and Eastern Europe. Domestic nitrogen plants are built near natural gas supplies and the products are then transported to crop producing regions.

The U.S. produces phosphate fertilizers including monoammonium phosphate (MAP) and diammonium phosphate (DAP).  These products are manufactured using supplies of phosphate rock in Florida, supplemented with imported raw material from Morocco.  Phosphate plants in the U.S. are located near the Florida and Texas coasts Phosphate plants use the imported and domestically sourced phosphate rocks along with ammonia and sulfur. Around 35% of production is exported from the U.S. into India and Latin America.  Potash is the final major component of fertilizers. The U.S. imports almost 80% of its potash from Canada.

The prices of raw material inputs contribute to the volatility in fertilizer prices. . It takes approximately 33,500 cubic feet of natural gas to produce one ton of anhydrous ammonia (82-0-0).  The cost of natural gas can account for up to 90% of the cost of manufacturing anhydrous ammonia. Anhydrous ammonia is then used to manufacture dry N fertilizers, such as ammonium nitrate (34-0-0) and urea (46-0-0). Prices of natural gas rose more than 550% over the past 10 years. Between June 2007 and June 2008, natural gas prices increased more than 65%.  Among commodities, natural gas prices have some of the highest volatility, second only to electricity.  Prices of phosphate rock, sulfur, and other materials used to produce fertilizers are also reasonably volatile. The price of Moroccan phosphate rock tripled, during 2007 while international contract prices of sulfur increased more than 170%.

This increased dependency on global trade has contributed to increased price volatility.  The U.S. fertilizer marketed is impacted by new factors including global demand and population growth, ocean vessel transportation rates, foreign trade policies and the value of the U.S. dollar relative to other currencies.  World population growth along with increasing average incomes in developing countries, directly impacts the demand for food and indirectly impacts the demand for fertilizer. The world population is currently increasing at a rate of 75 million per year creating additional food demand.  Because of current (2010) economic conditions, global fertilizer demand has moderated.  Over the long run, population and income growth will continue to put upward pressure on demand for fertilizers.

The global supply chain has also increased transportation costs.  Transportation costs account for over 20% of the cost of ammonia shipped from Trinidad and Tobago to the U.S. Gulf Coast, and more than 50% of the cost of ammonia sourced from Russia to the U.S. Gulf Coast.  The cost of transporting fertilizers from the U.S. Gulf Coast to crop production regions is also highly impacted by energy prices. Over the 3 years ending in January 2008, U.S. rail rates to transport ammonia from the Gulf Coast to the Mid-west increased 63%, and an additional 44% fuel surcharge was added to U.S. rail transport costs in July 2008 because of high fuel prices.

The increased reliance on imported product has also lengthened the supply chain.  When sourcing from overseas, fertilizer retailers must purchase inventories six to nine months prior to the time that producers actually purchase and use the product.  This forces dealers to try and project demand, as well as increasing their capital requirements and subjecting them to exchange rate risks.  During the 2003 to 2008 period the value of the U.S. dollar depreciated 48% relative to the Brazilian real, 34% relative to the Canadian dollar, 23% relative to the Russian ruble, 18% relative to the Indian rupee and 13% relative to  the Chinese yuan .  This increased the cost of fertilizer imports and made U.S. fertilizer exports cheaper to the importing country. The resulting increased foreign demand for phosphate fertilizers affected the U.S. supply.

A global supply chain also links U.S. producers to policies made by foreign governments.  Some countries subsidize fertilizer or cap domestic fertilizer prices.  Farmers in these countries do not adjust usage in response to global price changes which increases volatility in the remaining market.  Fertilizer exporting countries can also impose tariffs or export restrictions.  For example, in 2008 China imposed an export tariff of 185% on MAP and DAP products to ensure that domestic production remained in China.

The structural changes in the fertilizer market have created the potential for increased volatility.   Fertilizer prices, like crop prices, reflect market conditions. And, like crop prices, they are sensitive to and react quickly to a change in demand and supply. Because the production capacity of the U.S. fertilizer industry is limited, supply adjustments are increasingly linked to global factors including global food demand, ocean vessel transportation rates, foreign policies and exchange rate risk.   The longer supply chain also means that fertilizer retailers must project demand and purchase inventories six to nine months prior to the time that producers actually purchase and use the products.

On the other hand, the structural changes in the fertilizer market do not imply that fertilizer markets cannot remain relatively stable.  During periods when fertilizer demand is not disrupted by unforeseen weather events, changes in global fertilizer trade, or global economic conditions, the supply chain operates efficiently.  Price volatility in the United State is likely to differ among fertilizer nutrients because of fundamental differences in various nutrient markets. Nitrogen prices, which are more closely linked to energy markets will likely remain more volatile than phosphate and potash prices.  Over the long run,global energy prices are likely to be the dominating factor influencing fertilizer prices in the United States.